With a certain sense of inevitability, the Wryter Cup 2020 has been cancelled. We were due to be at Granville in October but the continuing uncertainty over COVID-19 has put paid to our plans. All being well, we’ll be at Hoylake in October, 2021.

It’s Car-nasty for the PGS!

Khalid Javed’s tartan troubadors were no match for their French rivals at Carnoustie in the 29th Wryter Cup.

PGS captain Khalid had made no secret of his passionate desire to win back the Cup we lost in spectacular fashion last year at Chantilly.

But even his inspirational team talks could not produce the victory we all craved at the toughest course in the UK.

Khalid said: “We tried our best but it wasn’t meant to be. The French put out a very strong team and they have some great players.

“I’m very proud of the team and it was a privilege to be their captain.”

At the end of the first day foursomes and fourballs, played over the Buddon and Burnside courses, the PGS trailed by three points.

That meant Khalid had no choice but to front-load his singles team for the final day challenge over the brutal Championship course.

But the French, shrugging off the memories of Jean Van de Velde’s infamous capitulation at the 18th in the 1999 Open, proved too tough. They eventually closed out victory to win 20-12.

We’re off to Carnoustie!

This year’s Wryter Cup team to face the French at Carnoustie was revealed by captain Khalid Javed after his day at The Shire. Click here to see final standings. 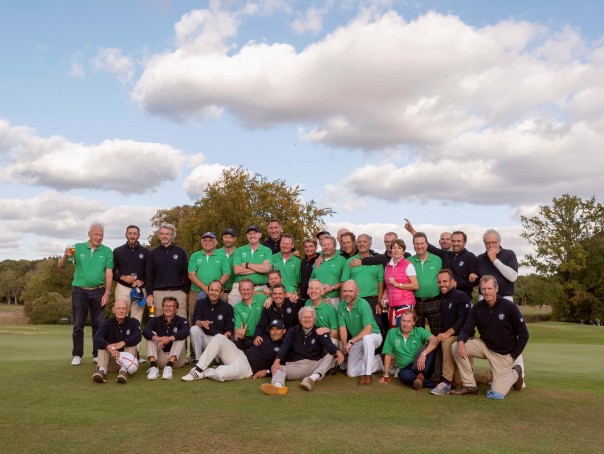 Ian Woods’ brave PGS team crashed to Wryter Cup defeat against a French team who made sure they had every advantage.

The 24.5-7.5 scoreline – sadly, a record defeat in the 26-year history of the competition – does not reflect the brilliant spirit within the PGS team.

The French play Chantilly twice a year in their society meetings and benefitted, as usual, from the slope system of handicapping.

The full scores are below, but the success of a trip is not measured by victory alone. We stayed in wonderful surroundings, ate and drank magnificently, and enjoyed playing a superb golf course.

The spirit between the two sides was as good as anyone can remember. As rookie Ross Slater put it: “If that’s how much fun we have when we lose, I can’t wait to be on the winning side.”

Woodsie was a great captain and we looked resplendent in our Coventry City light blue and Irish green shirts.

Sorry we couldn’t bring it home for you, skipper – but we’ll have them at Carnoustie next year!

What a team we’ve got!

As ever, the race for places added some special pressure on Captain’s Day, with several players needing good finishes to get in.

Ian and secretary Tim Allan get in without having to qualify, as do the two finalists in the Emsley Carr matchplay knockout – this year, Tony Smith and Steve Lewis.

The team is decided by taking each player’s best three results from the last meeting of the previous year (The Berkshire) and the first six meetings of the current year.

Woodsie’s two captain’s picks were Keith Malone and Bryan Nickless – coincidentally the next two on the rankings list available to play.

The match is at Chantilly from October 1 to October 3, where we’ll be doing our best to hold on to the trophy we’ve won for the last two years.

Bubbles up at Royal Portrush! 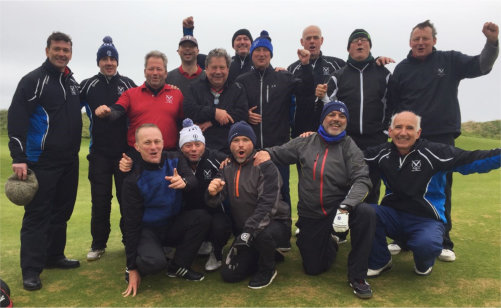 PUTT IT THERE – the PGS team (minus Ian McIlgorm, who had to leave early) celebrate their victory on the 18th at Royal Portrush

Andy Glen clinched the vital point to take us to the winning line, beating Francois Scimeca on the final green, before Khalid Javed ensured an outright victory by beating Ludovic Pont.

The PGS team, battling one of the toughest courses in the world in 50mph winds and frequent heavy showers, kept their nerve superbly over two days of slow, intense competition.

Bubbles said: “It was a privilege to captain such a great team, both on and off the course. They were simply fantastic.”

The PGS owes a huge debt of gratitude to everyone at Royal Portrush – especially ‘the boss’ Wilma Erskine – for their wonderful hospitality over the three days we were there.

The PGS now leads the annual series 14-13, having retained the trophy we won in Le Touquet last year.